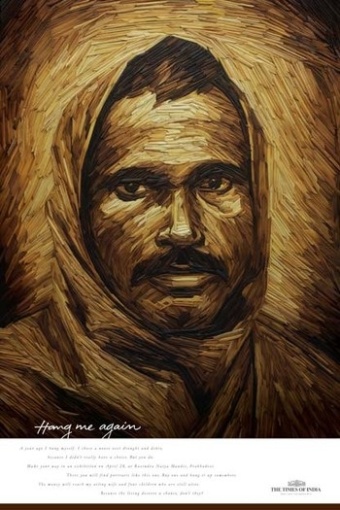 2013 is a very special year for Cannes lions as the festival completes sixty amazing years of celebrating creativity, India joined the party late but nonetheless quickly made an impact with Fevicol in late 90’s thanks to Piyush and his talented brother, Fevicol went on to become an icon for Indian creativity till Times of India and Agnello Dias took to the center stage. TOI and Agnello became synonymous with India creativity after winning a Grand Prix for Lead India same year Leo Burnett joined party with an incredible print campaign for Luxor with a record six lions including two golds. No one had ever expected India to out do that performance. With 2009 success Paddy emerged as a new star and soon teaming up with his onetime partner Agnello to launch TapRoot India.

TapRoot started playing a key role in taking Indian creativity forward, they not only had tremendous commercial success but have also been the torch bearers of Indian creativity, to draw a parallel one wondered what would happen if Piyush and his generation creatives were to retire? Well like in India cricket found the answers in Virat, Rohit, Shikhar, Raina and Bhuvaneshwar Kumar. So who is in Indian Advertising after Piyush, Balki and Prasoon? My answer would be Agnello, Paddy, Kennu, Rajiv, Nitesh and Arun Iyer these boys have taken India forward while Paddy lead TapRoot charge of 6 lions Kennu/ Rajiv lead Ogilvy’s with a record 10 lions.

The fabulous India show at the sixtieth Cannes special raked in 32 lions and come close to beating Brazil in print. I am sure the generation next will take India to the top summit soon as young Brazilians creative leaders did after Marcello Serpa.

2 thoughts on “So what if we can not beat them in football?”