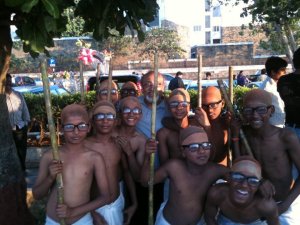 END_OF_DOCUMENT_TOKEN_TO_BE_REPLACED

One of the perks of being in advertising is to be privy to some of the most intimate moments of the history; in retrospective I recollect one, as Sachin is hanging his boots in few days I owe it to myself to narrate this amazing event to the world. It was in 2002, while working on a world cup cricket campaign for LG electronics; I was shooting 36-television commercials at a breakneck speed for the world cup in South Africa. LG tied-up with ICC as the primary sponsor and was allowed by ICC to use all participating 14 team captains for publicity hence the campaign with 14 captains ( “Cricket first” was the campaign theme), we got the time for shoot allotted by ICC in Colombo Sri Lanka whist the ICC champions trophy being played in that country. We had around 6 days to shoot all 14 captains, were allowed a couple of hours a day with out upsetting the team schedules.

We parked ourselves at the Hilton Colombo and marked several locations in the hotel for shooting different commercials to save time, one such location was the penthouse suite; One of the days when we were set to shoot the combinations with Nasser Hussain, Waqar Younis, Shaun Pollack, Stephen Fleming and Carl Hooper, while Nasser Hussain was getting ready for his shot, I was watching India playing Zimbabwe in one of the bedrooms sitting in center of the bed, soon I was joined by the legendary bowling captains, Waqar, Pollack, Flaming and Hooper.

Soon the bowlers were glued to the TV watching the Indian “God” batting, I still remember the mesmerizing site of four bowlers watching master batsman Sachin bat,  like little kids seeing an instructor play. I was pinching myself for what I was witnessing and then all hell broke loose as Sachin gets out cheaply to Heath Streak or Henry Olongo, In unison you see all four raising hands in air and say “Shit” with utmost disgust and argue amongst themselves about, how unfair the life is; while Pollack says “ we all are always asked to bowl straight and we follow that religiously and look at this bloke bowling wide outside the off stump and the master decides to ignore all his discipline and reaches the ball to give a catching practice to the second slip.” “Why does this bowler gets “Masters” wicket so easily? And why do we have to slog for days to get him?” adds Waqar.

I can never forget how lucky I was to see the greatest bowlers of all time discussing about Sachin’s batting and putting the kind of importance to his wicket in their life is simply amazing, bowlers around the world practice relentlessly for months and years to get him out is a testimony to his greatness and being a witness to such an event makes my 34 years of advertising career worth the while.

Many years back my partner Chax used to have a poster in his office, which read as follows: ” If you do not find space on the floor then use the ash-trey.” the same sounds true to Indian cricket broadcasting  ” if you do not find ad spots then run live cricket.”

Strange isn’t it. Being an advertising person to hate ads in a cricket telecast, point is not my obsession for cricket; in fact it’s for advertising. People who watch cricket are passionate about cricket and they are mature enough to know the role of ad revenue in cricket broadcasting, it is when ad spots cross the line, it’ gets destructively irritating and broadcasters have been doing this consistently last couple of years. Who will lose in this? Viewer, broadcaster or the advertiser?

I guess you do not have to be a genius to figure out that the advertisers are going to lose out for annoying the viewers and loosing ethical and emotional stature with the viewer/ consumers therefore lose certain emotional equity of the brand advertised. It’s like an irritating pet throwing ball at you urging you to play when you are making love to a women.

I appeal to all my dear clients not to make their ads work against them by placing in an over booked slots and to my dear media planners not to get carried away by the TRP’s and OTS, please also keep in mind brand values and look at people in the context of cricket passion this session.

Leave the dog to do the rest.

Drawings from my iPhone 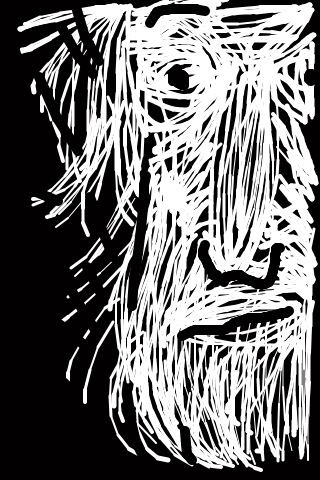